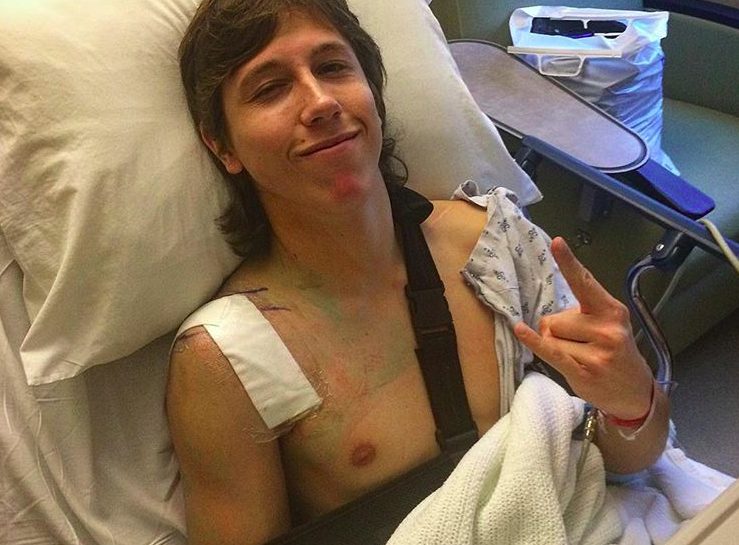 In the 2018 Winter Olympics, the event coordinators made the decision to continue with the Women’s Snowboarding Slopestyle Final despite dangerous wind conditions. These women had made it to a Final on the largest stage in competitive sports, and were given the option to ride in dangerous conditions or simply give up after all of their hard work and dedication. Multiple women were injured in the event after making the decision that most people would in that situation – they chose to compete.

In May of 2005, Brian Deegan was asked to perform a backflip on his dirtbike in less than ideal conditions for the MTV show “Viva La Bam”, and he knew it. There was a strong crosswind, but they decided to move forward with the shoot. His pride and desire for fame wouldn’t allow him to say no, so he went for it anyway. After catching his stomach on his bars, sustaining internal bleeding, and almost losing his life, he started to wonder how “worth it” his pursuit of fame and progression really was. Brian had always been known to risk himself in order to further his career, his fame, and his pride, but for the first time he was having reservations about his decision making and started to point his life in a safer direction.

Jeremy Lusk was a freestyle motocrosser taking the world by storm as he began winning huge competitions in the early stages of his career. Lusk was competing at an FMX competition in Costa Rica in early 2009. Multiple sources indicate the setup was less than ideal, there was wind, and Lusk simply wasn’t riding like the dominant force he was. Lusk came up short on a backflip variation trick and broke his neck, causing irreversible brain damage that would lead to his death the next day. Jeremy Lusk’s death hit many people in the action sports community hard, making them question if everything they were doing was really worth the risk of it all.

“It made me look at life. I said from here on out I’m going to live my life the right way. I’m going to try to make the best of it and spend the most time with my kids and my family and the people I love, and my friends. It just made me think of all the dumb little things I’ve argued over and my bad attitude and being negative. It gave me a vision: I said I was over wasting my time anymore. Life’s a gift, and it can be taken away just like that.” – Brian Deegan on the death of his best friend, Jeremy Lusk

There are countless more examples of tragedy in action sports, from Erik Roner’s shocking skydiving death to Shane McConkey’s fatal ski BASE jump. It seems tragedy is inevitable in action sports.

Yet here we are. It’s now late 2018 and action sports have been pushed farther than ever imaged. Travis Pastrana did a double cork 1080 on a motorcycle. Josh Sheehan did a triple backflip nearly 100 feet in the air on his dirtbike. Jed Mildon can quad backflip a BMX bike, while Ryan Williams can triple frontflip one. A handful of snowboarders are now throwing quads with ease, and who knows what’s been going on behind the scenes in the hush-hush community of BASE Jumping. Bottom line – it’s not stopping anytime soon.

So what point am I trying to prove? I need to start by pointing out that I am not recommending that anyone spend their time on the couch because the world is too dangerous. I am a snowboarder, mountain biker, dirtbiker, wakeboarder, skater, and more. I seize the opportunity to get outside and push myself. I do not think people should stop doing what they love because of the unfortunate tragedies that happen to a small percentage of people in the community, nor do I think those people would want anyone to stop pushing.

The devestating stories above all have one thing in common: there were risk factors. Well, higher risk factors than normal. Sure, action sports at a high level will always be risky. But when risk factors start to become factors outside of your control, that’s when it’s time to assess the situation and consider the bigger picture. Your head can be in the game, but when wind, visiblity, a poorly built setup, etc. becomes part of the equation, you’re no longer in control. This is the point when it’s time to weigh risk versus reward and be prepared to swallow your pride.

I think the moral of the story is the action sports community has lost (or almost lost) a lot of talented, influental, and all around great people due to lack of this consideration of risk versus reward, compounded with the inability to swallow pride in a community that thrives on success. I hope everyone continues to push the envelope and the progression goes on, but I hope it can happen with a smaller percentage of tragedies. In a community where the body does the talking, let the mind take control for once.