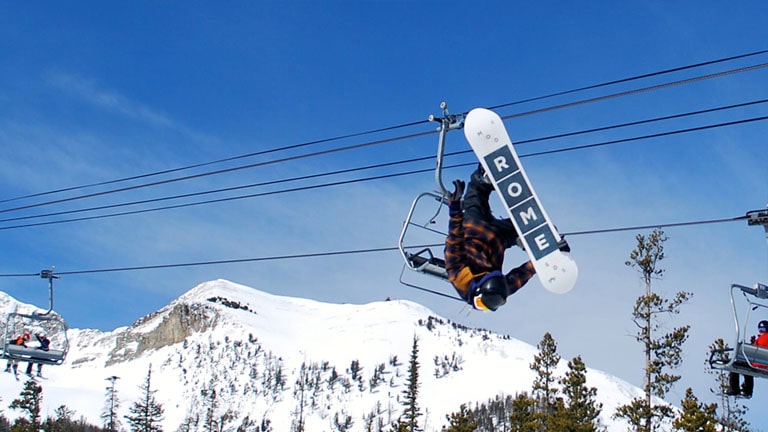 This tutorial will focus specifically on a backflip and laid out backflip on a snowboard rather than a wildcat. If you’d like to know how to wildcat (straight over the tail backflip), click here. The backflip is a fun trick on a snowboard that isn’t too hard but can be scary to learn. Once you’ve got it dialed you can lay it out on huge jumps and features and do it all over the mountain. It’s a trick that will always be in your arsenal and you’ll be glad it’s there!

To do a backflip on your snowboard, you need the following:

Notice that 360 isn’t in there. Guess what? Backflips are easier than 360s! No lie. They’re scarier for sure because you’re going upside down, but technically backflips are more natural and easier to land than 360s. Imagine that.

I learned to backflip on a park jump and I don’t think it’s a bad way to do it. The jumps are usually well built. Try to find a soft spring day to try it on. The alternative would be a nicely built poppy jump. A jump about waist high that sends you straight up is super ideal – you don’t have any choice but to flip it.

So, you’ve got the 4 requirements above and you’re ready to send it. Hit the jump a handful of times to make sure you know how much speed you need. When you’re ready to flip, approach the jump and transition from an edge to flat base as you’re closing in on the takeoff. Bend your knees. As you rise up the takeoff, extend your knees and pop as you allow your chest to rise and you throw yourself backwards. Do not focus too heavily on flipping and flip too early. I’ve seen people hit their heads on the takeoff because they flipped so early. You must let yourself rise. The flip will come around, so don’t rush it.

Around halfway through the flip you will see your landing. This is the point where you can choose to bent your knees more to speed up the rotation or to extend your legs to slow yourself down. You probably won’t spot the landing your first attempt because it’s so much to take in at first. Give it a few tries. Bring it around, absorb the landing with your knees, and ride away clean.

Backflip Issues and How to Fix Them

If you’re struggling to ride away without washing out, you’re not alone. Most snowboarders have a problem with it at first. If this is happening to you, on your initial throw you need to focus on throwing back towards your tail rather than back as you would on a trampoline. While a wildcat is straight over the tail, I like to think of a big laid out backflip as being a diagonal cross between a barrel roll (straight over, like on a trampoline) and a wildcat (straight over the tail, like a sideflip). Barrel rolls are tough to not wash out on, and to be honest they’re not that cool or fun either. Focus on the somewhat diagonal throw off the lip and that should help tons.

Once you’ve got it, do them all day every day until you’re stomping them with ease. Work your way up to bigger jumps and then  start laying them out and/or adding grabs. Backflips will always be a crowd pleaser, and they’ll always be fun. Go get it!

How to Backside Rodeo 540 on a Snowboard