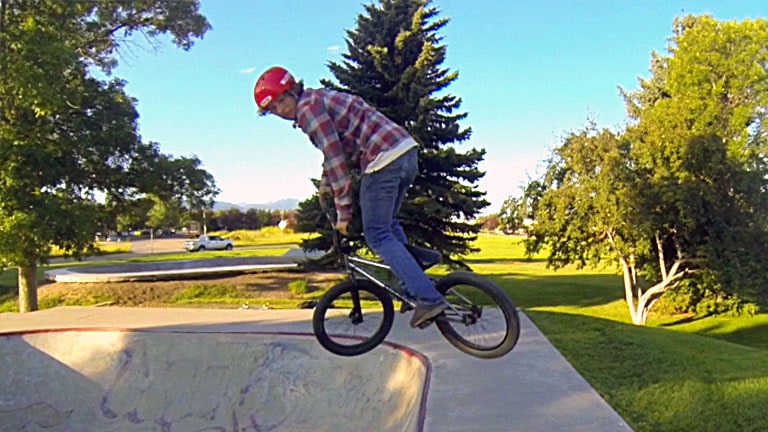 The 360 is a super fun trick on your BMX bike that you can do all over the place once dialed. It’s a bit scary at first but isn’t too technical as long as you’re comfortable on a bike. There are a few things to focus on while learning this trick. When learning, a 3-4 foot flyout at your local skatepark or your local dirt jump park will be the place to go.

When setting up for the BMX 360, you’ll want to be in the standard “attack” position – knees slightly bent, pedals parallel to the ground (one foot in front of the other), arms slightly bent, and weight slightly back. As you approach the takeoff, bend your knees a bit more. As you transition from the bottom of the takeoff to the top, start to “pop” by extending your knees and arms and bringing the bike up with you.

As you reach the top of the transition, throw your head and shoulder in the direction you will be spinning. Focus heavily on staying upright – do not dip your shoulder down when you pull. It’s easy to get off axis and accidentally be spinning sideways. If this happens, you can take your feet off the bike and let the tail spin freely. Bailing on 360s isn’t too tough, so be prepared to do so if you get an improper takeoff. If all is going well and you’re spinning with your bike under you, bring the bars closer to your hips as your body extends. Keep your head and shoulder turned with full commitment until you see your landing. At this point, you can start moving your body back into that “attack” position discussed above. Put the rubber to the ground and ride away clean!

There are a few common problems riders experience when trying to learn to 360 on a BMX bike. One is too much spin without enough pop. Although a BMX bike is small, it’s still got a fair amount of length behind you. Once thing I had great trouble with was hooking my rear wheel on the takeoff. I would initiate the spin too early without popping up. This would cause me to rotate about 90 degrees at which point my rear wheel caught up and stopped my rotation. To fix this, I tried to focus on waiting as long as possible to spin. Although I don’t think it really changed my timing, it allowed me to focus more on the pop and correct body position than trying to force the rotation around.

Just like any trick, you need to let the 360 on a BMX bike rise before you work too hard to rotate. The 360 really isn’t tough to get around with a proper takeoff. Also, be sure to keep your feet locked into those pedals. You’ll find it’s not too hard to slip a pedal or accidentally let your pedals spin and cause you to lose balance. Focus on keeping that body position locked in while you’re in the air.

Best of luck with this trick! Leave a comment below with questions or progress. Huge thanks to Ty for helping with this tutorial.

How to Heelside Frontside 360 on a Wakeboard

How to Tantrum on a Wakeboard

All BMX Tutorials
View All Sports