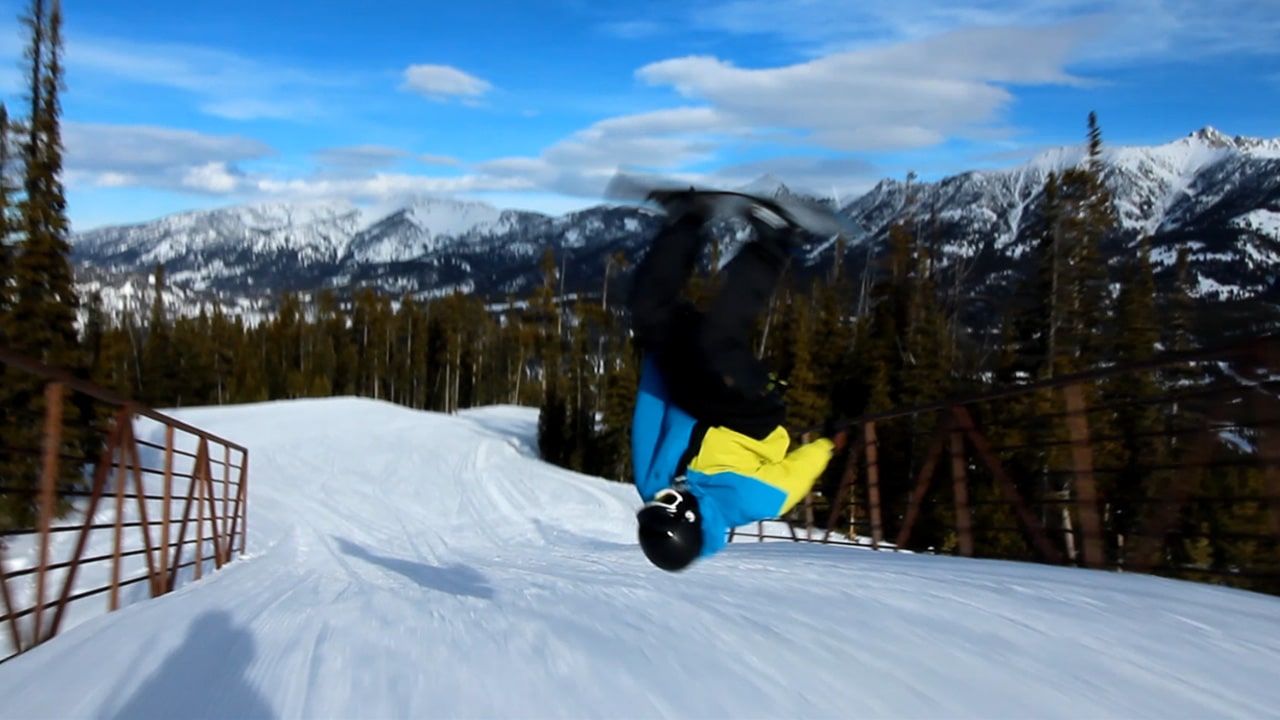 The Tamedog is a little intimidating to learn, but quickly becomes one of the most fun tricks to do around the entire mountain. Once you get good at them, it becomes easy and natural to huck Tamedogs off of knuckles, rollers, rails, moguls, jumps, cliffs, and pretty much anything else you can think of. The name Tamedog originates from the opposite of “Wildcat”, which is a straight over the tail backflip. (Learn how to do a Wildcat here). So being the exact opposite, a Tamedog is a straight over the nose frontflip, or sideflip.

The hardest part about learning a tamedog is learning to snap cleanly off of the nose. It is easy to throw diagonally or slip your nose by accident when learning. The most ideal spot to learn is off of a cat track with a decently steep drop off into soft snow. It’s a flat, level take off that forces you to snap, allows you to go slow into it, and has low consequence. Jump knuckles are also good options, but are slightly less forgiving.

Time to Send It

Once you’ve found the spot, you can learn this trick at a pretty low-speed. Focus on putting your front shoulder directly over the nose of your board and turning your head uphill as you snap. The goal is to do a perfect sideflip, so really focus on that axis. The nice thing about this trick is you actually can spot it much earlier than a normal frontflip. At about the 2/3 mark your head that has been looking backwards is now facing downhill again and looking at the landing. You’ll be super lost for the first few attempts (and probably not get the snap), but after a few tries you’ll start to feel it and spot that landing.

Some people choose to grab their knees to keep that axis straight; I tend to let my arms just hang but do whatever is comfortable. Once you get really comfortable you can also throw in a nose grab, and those are super fun. Overall, this is a weird trick at first. Moreso than most tricks, I felt like I had no idea what I was doing when I learned this. The good thing is, if you commit, you’re getting past your head even if you screw up on the snap. It is a pretty low consequence trick. Just accept that the first few are going to be super weird, but once you get it it’s dialed in quick and you can do it anywhere on the mountain. Then learn it switch.

Best of luck! Leave a comment down below with your progress or if you have any questions.

How to Backside 360 on a Snowboard