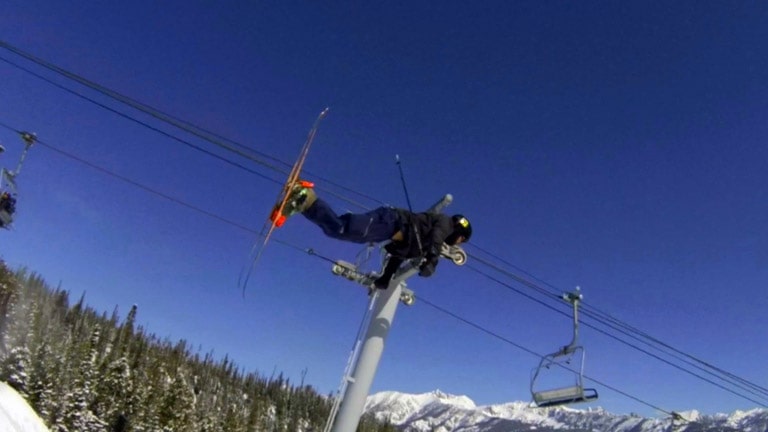 Frontflipping skis can be a little intimidating, but really isn’t too difficult. Before attempting this trick, I would recommend being able to frontflip on a trampoline or off of a diving board, as well as being comfortable hitting jumps on your skis. Most people also learn to backflip or 360 skis before the frontflip, but it’s not necessary. Backflips are easier and aren’t a bad idea to have in your bag of tricks, as they will help with air awareness on skis of going upside down. But truthfully, as long as you can hit jumps comfortable and have frontflipped before you’re ready to go.

Frontflips don’t require a particularly special jump. While backflips are ideal on a poppy jump, frontflips can be done on steep or flatter takeoffs. Super steep takeoffs aren’t ideal as they actually make the trick a little harder, but some decent pop is good. My first frontflip was on a 15-20 foot small park jump with a semi-poppy takeoff. A jump around that size is good to learn on, as one of the hardest parts of frontflips on skis is judging the speed of your rotation since they’re blind. It’s better to start small and work your way up.

So you’ve found the jump and you’re ready to get inverted in the forward direction. The biggest thing I was nervous about on my first frontflip was getting over my tips. I was nervous with how much ski was in front of me that I’d try to flip too early and just sail forward headfirst into the landing. What actually happened was that I stomped it, and my fears of getting over my tips were irrational. One thing to focus on in the takeoff is popping slightly earlier than you might on another trick. On a frontflip, the bulk of your pop should come when your tips are right at the end of the takeoff. This allows you to get a little bit of “snap” from your skis to help kick the flip over. If you pop late, you’ll feel it takes a lot more tuck to bring the flip around. This is unlike a backflip, where you pop as your boots are nearing the end of the takeoff as opposed to your tips.

As you snap forward, focus on rising as well. Don’t just throw down into a forward tuck – you’ll get no height and the flip will be low, fast, and sketchy. Think about popping forward but still letting your chest rise up as you throw your momentum into a frontflip. For your first flip on a small jump, tuck until you feel you’ve about finished the rotation and then open up. You’ll quickly figure out if you misjudged or not. On early frontflips, it’s best to underrotate than to overrotate. A backslap and shin bang is easier to deal with than getting bucked over the front to your face. Frontflips are blind to land, which is what makes them scary for many people. After you’ve done 1 or 2, they’re not that hard to judge rotation and are very fun to do.

Once you’ve landed a couple on smaller jumps and want to take them to bigger features, I recommend laying out the beginning part of the flip. It doesn’t have to be full superman, but you can stare at the landing without tucking until you know you have just enough time to flip left. At that point, you can tuck hard and finish the flip out. This essentially allows you to flip any size jump the same as you would a small jump – you simply lay it out at the beginning until it’s time to flip, and then you can flip at the same speed each time. This take out a lot of the guesswork. Instead of being tucked and blind for say 2 seconds, you know exactly where you are for 1.5 seconds and quickly rotate the flip in 0.5 seconds. This isn’t the method everyone likes, but I do personally find it easier to judge.

If you want to learn tiny frontflips off of knuckles, rollers, natural features, etc. they’re not too much different aside from the takeoff. On a jump you can take off evenly since there’s so much time, but for punch frontflips one foot must dominate the takeoff to initiate a harder snap. To do so, lift your dominant foot right before you want to flip and then try to snap it down to initiate power and force over the tip of that ski. Your back ski will follow (your legs should be slightly staggered) and you can then drive that tip off the lip as well to provide a little extra momentum. From there, everything else is the same. Keep it tucked tight and ride away clean.

The most technical and difficult part of the frontflip is the takeoff. Taking off to early isn’t too common, but if that is your issue be patient. I know I said the takeoff is earlier than many tricks, but it’s not too early. Be patient and remember to snap when your tips are at the lip of the takeoff. Many people, on the other hand, flip late. This makes it hard to get a lot of snap and causes you to flip slowly. In a frontflip, it’s better to flip fast and open up to slow your rotation down than to wish you were flipping faster and not be able to do much about it. Focus on snapping at the correct time so you have as much control in the air as possible.

Frontflips aren’t an incredibly common trick, but they’re super fun. Once you get past the fact that they’re blind and learn to judge your rotation, they truly are a blast and learning to lay them out makes you feel like superman. Best of luck this trick! Comment with any questions!

How to Frontflip on a Trampoline

How to Hit a Jump on Skis

How to Backflip on Skis

All Skiing Tutorials
View All Sports